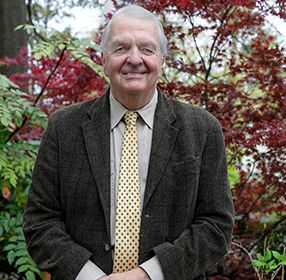 Ted Landphair, a native of Lakewood, Ohio, and the husband of This is America! photographer Carol M. Highsmith, retired from the Voice of America, where he worked as a feature reporter and writer, specializing in “Americana” coverage for VOA’s international audience. Over the last four years there, he wrote VOA's Americana blog, "Ted Landphair's America," in which he often recounted stories of his travel to every state, often in company with Highsmith. Her photos were a highlight of just about every blog. Landphair also wrote about current trends and issues and delighted in including historical background on many subjects.

This is America! Foundation Advisory Board member Dan Austin was VOA’s director during some of Landphair’s tenure at "the Voice," as it is sometimes called.

Landphair wrote the texts and captions for almost all of the coffee-table books that have featured Carol M. Highsmith’s photography, including those about U.S. cities, states, and regions for a Random House imprint, as well as others about such subjects as barns, lighthouses, engineering marvels, the Amish, "America's Main Street" (Pennsylvania Avenue), the Korean War Veterans Memorial, Washington's Union Station and foreign embassies here in the Nation's Capital.

Over 20 years earlier in his journalistic career, Landphair served as a radio news director in three major markets: KFWB in Los Angeles, WGSO in New Orleans, and WMAL in Washington, where, along with This is America! Board member Marc Kuhn, he was honored to share in a Peabody Award for radio documentaries. Foundation Advisory Board member Elizabeth Board was also a WMAL colleague in the programming department that Kuhn later led.

In his first job out of graduate school at the University of Iowa following undergraduate study at Ohio University, Landphair taught journalism at Midwestern University in Wichita Falls, Texas. He remarks that “I soon learned that teaching is harder than it looks!” and he switched careers to the practice rather than instruction of the journalism craft. Next came a stint at the Dow-Jones nationwide newspaper The National Observer, where Landphair got his first taste of extensive travel, covering education and sports.

As Landphair noted in his final VOA blog, “I was raised in a Cleveland suburb by my mother, an elementary-school teacher who did not drive, I have had a lifelong love of writing (I wrote my first "book" in second grade!) and geography (ask me any state capital!) and have taken immense enjoyment from visits to U.S. states, cities, small towns, rural areas, and national parks.”

Ted Landphair writes the This is America! blog on the foundation’s Web site, updating its readers on photographer Highsmith and videographer Doebele’s expeditions, other foundation activities, and his own observations about our vast and fascinating nation.